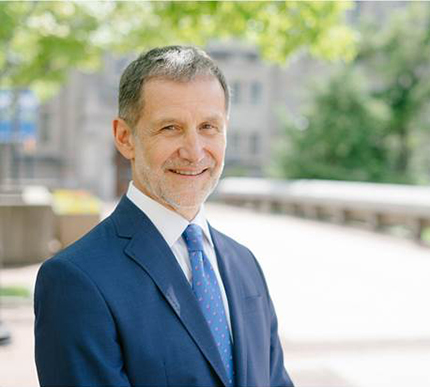 Prior to his appointment as interim president, he served as interim dean of Academic Affairs.

A professor emeritus of biology at the City College of New York, Dr. Lemons’ areas of specialty are cardiovascular and comparative physiology. He received his Ph.D. from Columbia University, where he became an assistant professor before moving to City College in 1990.

Dr. Lemons was one of the original faculty members of the City College-based New York Center for Biomedical Engineering, which became a CUNY doctoral program and later the Department of Biomedical Engineering. Collaborating with faculty members of the Grove School of Engineering on research in bioheat transfer and vascular mechanics, he received NIH and NSF funding for over 15 years. Dr. Lemons also led a number of funded projects for innovation in undergraduate science education. He holds a U.S. patent for hands-on biomechanics teaching models, and invented a mechanical heart simulator now used in graduate and undergraduate programs in the United States and abroad.

At City College Dr. Lemons served the biology department and Division of Science in a number of leadership roles and was a member of the faculty council for many years. In 2003, he was appointed the dean of the Center for Worker Education. Under his leadership, the center became the Division of Interdisciplinary Studies in the College of Liberal Arts and Sciences.

In 2007 Dr. Lemons went to the CUNY Graduate School to serve as the associate provost and dean for doctoral science programs, where he led a comprehensive reorganization of the CUNY doctoral science programs. He returned to City College in 2008 to become the dean of science and then the acting provost and senior vice president for academic affairs. During that time, he helped found a new interdisciplinary masters program in sustainable urban development and was the administrative lead for the college’s entry in the 2011 USDOE Solar Decathlon in Washington, D.C.

From 2012-2013 Dr. Lemons was on leave from CUNY and co-founded an institute that focused on global energy poverty through energy development projects, primarily in Haiti. He helped found the CUNY Advanced Science Research Center’s animal care and use program and oversaw it from 2014-2017.

Dr. Lemons served as an elected trustee in the village of Hastings-on-Hudson, NY, from 2015 to 2020, focusing on sustainability and the environment. In that capacity he led numerous sustainability projects and worked with Hudson River conservation organizations, including Scenic Hudson and Riverkeeper, in efforts to preserve the Hudson River ecosystem.