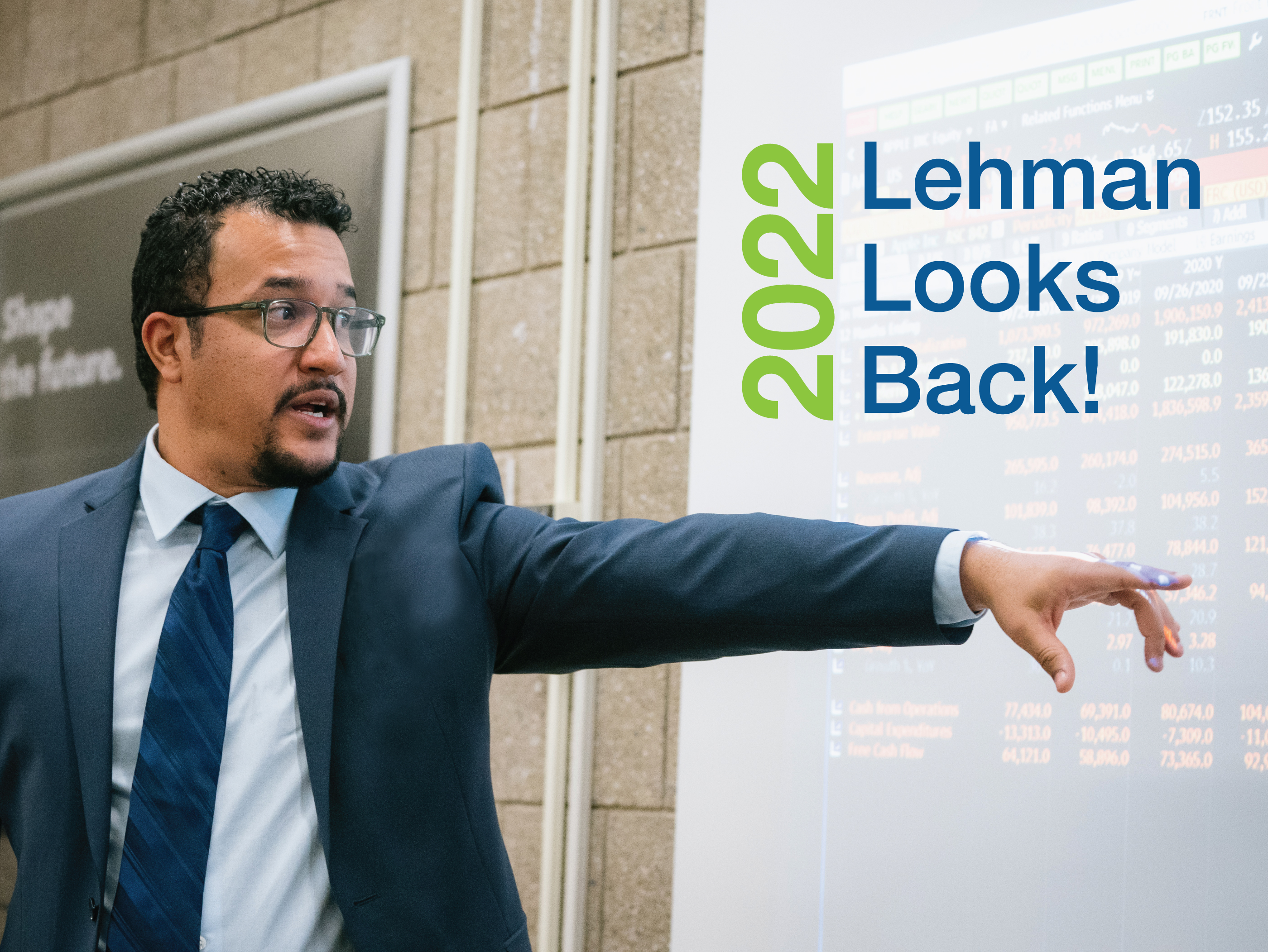 After CUNY loosened pandemic-related restrictions last winter, a greater number of faculty, students, and staff resumed in-person activity on the Lehman campus. The sense of community rebounded, and along with this renewal came timely announcements of significant growth and achievements. The top news features from the past year attest to the forward momentum and collective strength of the College, its students, and alumni—even as we were teaching, learning, and working in a city still unsettled by COVID. All are reasons to be #LehmanProud.

Go to Lehman.edu/news for a more complete picture of Lehman’s successes in 2022.

Lehman students with big entrepreneurial dreams have a chance to get the resources and guidance they’ll need to bring their business plans to life, thanks to an innovative new program, Blackstone LaunchPad, run by the Blackstone Charitable Foundation. Lehman is one of nine CUNY colleges to work with the Foundation, which has committed $6 million to make the program available across the University.

This spring, Lehman junior Genesis Vargas will be getting an up-close look at the halls of power and rubbing elbows with the nation’s lawmakers: She’s one of 17 students from across the country to be selected for a prestigious Congressional Hispanic Caucus Institute (CHCI) internship.

The Lehman College Food Bank, an essential resource for many students, particularly during the pandemic, is partnering with the nonprofit World Central Kitchen to provide qualifying students with free ­­­­­­­restaurant meals starting this month. Eligible students will be able to use the organization’s text-messaging service WCK Direct to order daily meals for their households from participating local restaurants.

For the last several months, Lehman alum Demond “Dom” Mullins ’07 has been training hard for what could be described as the ultimate history-making adventure. In April, the avid outdoorsman will attempt to summit Mt. Everest with Full Circle Everest, the first all-Black climbing team to embark on an expedition to the top of the highest mountain on earth.

Nearly 20 years after it admitted its first class, the William E. Macaulay Honors College at Lehman is celebrating a few historic milestones. It has seen unprecedented growth: Applications in the last academic year have nearly doubled, with many more students from local high schools seeking and gaining entrance. What’s more, the numbers of some historically underrepresented groups have also shot up. Those gains, according to current and past directors, are the result of a concerted effort by the program’s staff, Lehman’s Office of Admissions, and College alumni to spread the word, particularly in underserved neighborhoods.

Lehman College will mark a milestone this May, holding its first in-person commencement ceremony since the start of the pandemic. And as it celebrates the class of 2022 and the resilience of the borough it calls home, it will recognize three public health and social justice activists whose work has improved—and saved—countless lives in the Bronx

Last week, Lehman College was given the green light to launch a Doctor of Education in Organizational Leadership, Development, and Change (EDOL). Housed in the School of Education, the 52-credit interdisciplinary program is one of only three Ed.D. degrees offered at CUNY, and the first online, interdisciplinary doctoral program of its kind offered by a CUNY institution.

On July 1, after 10 years of planning, Lehman College opened the first and only business school at a public college in the Bronx and Westchester. The Lehman School of Business is the College’s sixth school and the second launched within the past decade. Formerly the Department of Economics and Business, the School of Business builds on the College’s strong reputation within the business community and will serve as a major pipeline for preparing diverse talent from underrepresented populations for local, regional, national, and international workforce needs.

Lehman College has received final approval from New York State to offer the Master of Science (M.S.) degree in Counselor Education: Clinical Mental Health Counseling (CE: CMHC). Its weekend-based method of instruction designed for working professionals and career-changers makes it the only full-time clinical mental health counseling program of its kind in The City University of New York's system.

The National Science Foundation (NSF) announced today that it is awarding a $26 million, five-year grant to a multi-institutional team, comprising Lehman College, Columbia University, Florida Atlantic University, Rutgers University, and University of Central Florida for a NSF Engineering Research Center for Smart Streetscapes (CS3). The team will be led by Columbia Engineering researchers. The grant, which is expected to bring $980,456 to Lehman over five years, supports research centers focused on developing engineered systems technology and educational initiatives with high societal impact.

Lehman College is a recognized driver of economic mobility, and its success has once again been lauded—this time by Degree Choices, which ranked Lehman No. 1 nationwide among 300 “Best Hispanic-Serving Institutions” for 2022.

“Lehman College takes great pride in making a difference in the lives of students and alumni,” said president Fernando Delgado. “As a first generation Latinx student myself, this accolade resonates personally and professionally, and I expect we will continue to gain recognition for the success of our graduates.”

For the second year running, Lehman College was named a Fulbright HSI Leader the U.S. Department of State’s Bureau of Educational and Cultural Affairs (ECA). The designation recognizes the noteworthy engagement that selected Hispanic-Serving Institutions (HSIs) have achieved with the Fulbright Program, the U.S. government's flagship international educational exchange program.

CollegeNET, Inc., a major provider of web-based on-demand technologies for higher education, has released the ninth annual Social Mobility Index (SMI), naming Lehman College No. 18, near the top one percent of higher education institutions in the nation. The 2022 SMI, released Nov. 1, benchmarks four-year U.S. colleges and universities according to how they hold the line on tuition, enroll students from low-income backgrounds, graduate those students into good jobs, and use their messaging to address social mobility issues. Over 1,400 four-year institutions were ranked.