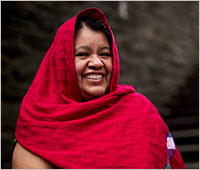 Natalia Méndez is the co-owner and head chef of La Morada, a family-owned and Michelin-star bearing Oaxacan restaurant and community hub in the South Bronx that seeks to preserve Indigenous Mexican cuisine while creating sanctuary, family and community for all who enter its doors. Méndez is one among a long line of curanderas (healers) and applies her knowledge of ingredients’ nutritional and healing properties to develop her cuisine. True to the saying, “donde come uno comen dos (where there is enough food for one, there is enough for two),” she welcomes everyone into La Morada, through which she also connects with New York City Indigenous women in the struggle for immigrant rights, human rights, Indigenous rights and food justice.

After her family battled its own wave of COVID-19 at the beginning of the pandemic, Méndez transformed La Morada into a soup and mutual aid kitchen, providing 1,000 meals daily for several weeks, and later, 650 meals a day to members of a community in need. Méndez and her family not only distributed food aid in the short term, but also seek to reclaim land and utilize community gardens and farms for their ingredients so that more Bronxites may have access to food production and farming. She and her family engage in the pedagogical project of passing on transgenerational information about Indigenous foodways and good food as medicine--as a source not solely for health but also for healing. Her cooking has received numerous awards and recognition and is favored by top chefs. Méndez received the Three Kings Medal by El Museo del Bario in 2017 for her significant contributions to the Latinx community. 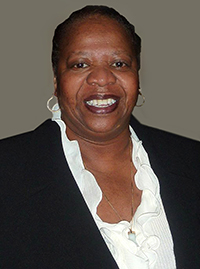 Cleo Silvers is a pioneering community organizer who has made extraordinary contributions to public health in the South Bronx. Born in Philadelphia, she attended Lehman College between 1969-1970 before dedicating herself full time to activism and mobilizing students against the Vietnam War.

She was working at Lincoln Hospital’s Mental Health Services department and was a member of 1199/SEIU Hospital Workers Union when she participated in the first of three historic occupations of the hospital. Silvers cofounded the Think Lincoln Committee, a coalition of community members, hospital workers, and Young Lords and Black Panthers, which demanded and won, among other things, the establishment of the Lincoln Detox drug treatment program and requiring full patient consent for treatment or research. (The group collectively penned the Patient’s Bill of Rights, now seen in every hospital room across the country.)

After the first occupation, Silvers joined the Black Panthers and the Young Lords and co-chaired HRUM (Health Revolutionary Unity Movement), which made the initial public calls in the Black and Puerto Rican community for “healthcare as a right” and “free, quality, preventative healthcare for all.” She participated in two additional occupations of Lincoln Hospital, helping to change the course of patient care at public health institutions across the country.

She later became the executive director of For a Better Bronx, a South Bronx-based environmental justice nonprofit organization, and has also served as director of corporate education at Long Island University School of Continuing Education and director of outreach for Mount Sinai Irving J. Selikoff Center for Occupational and Environmental Medicine’s World Trade Center Health Program. In 2010, at the age of 63, Silvers received her bachelor’s degree in Labor Relations from Cornell University School of Industrial Relations (ILR), a collaborative program with the National Labor College. She was class valedictorian.