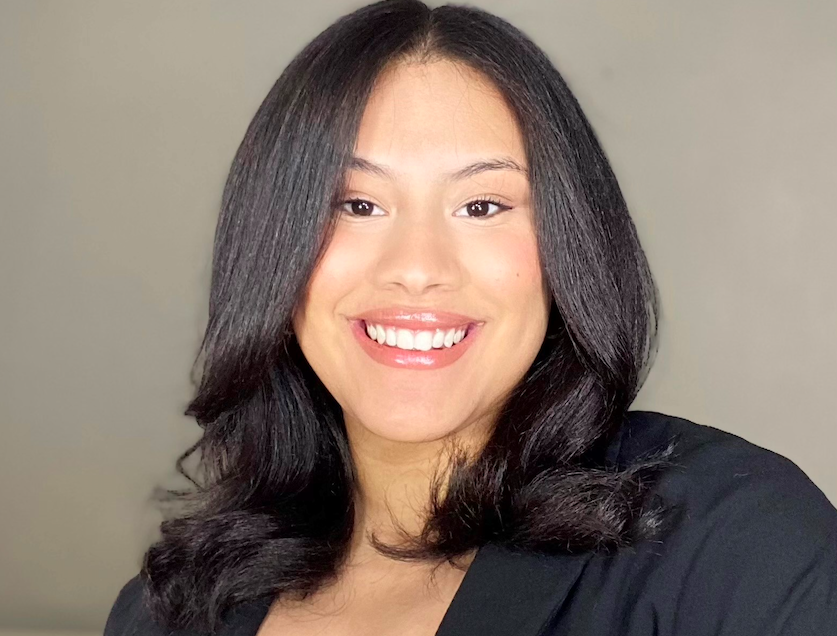 In 1845, Frederick Douglass spent two years touring Ireland and the United Kingdom to avoid being recaptured into slavery in the United States. While there he met Irish abolitionists whose writings had profoundly influenced him as a youth.

This year, Katherine Sánchez, a sophomore nursing major at Lehman College, will trace his footsteps as a winner of the 2021 Frederick Douglass Global Fellowship. A highly competitive award offered by the Council on International Educational Exchange (CIEE), it honors the global legacy of the abolitionist, writer, and statesman. Fellows attend a four-week summer study abroad program to study leadership, intercultural communication, and strategies to affect social change.

Sánchez was one of just 14 students selected for the fellowship from more than 500 applicants and is the only student from New York City. (Watch Sanchez and other fellows discuss the meaning of the award here.)

“Your nation is so proud of you,” Vice President Harris told Sanchez and the other student fellows. “You will travel, you will create friendships around the globe as an extension of the work that we do as a country to inspire and to work on and to build on the friendships we have around the world. And hopefully when you’re in Ireland this summer, walking in the footsteps of that great American, Frederick Douglass, remember that you are great. You not only have the capacity to be great. You are great. And you are walking in great footsteps. He imagined I’m sure in those days when he was in Ireland that you would be coming behind him.” 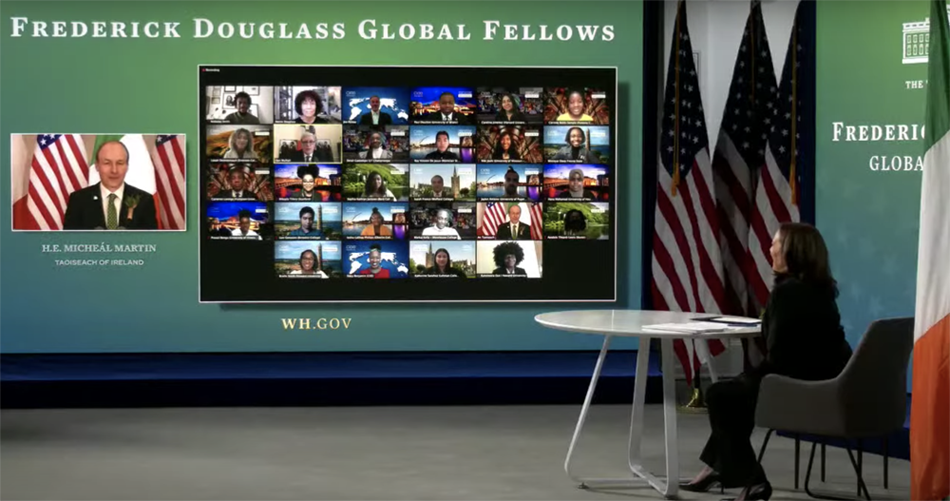 Previous fellowships have taken students to London; the 2020 fellowship, which was suspended because of the pandemic, had been planned for Cape Town, South Africa. This year, Ireland’s Department of Foreign Affairs is cosponsoring the fellowship in commemoration of the 175th anniversary of Douglass’s visit and his meeting with the Irish reformer Daniel O’Connell in Dublin.

“The welcome and respect with which Frederick was greeted across his tour of Ireland affected him profoundly,” Douglass said. “I can think of no better place for future American leaders to gain a global perspective and prepare to be agents of change.”

The program’s selection process emphasizes qualities reflecting Douglass’s own character, including academic achievement, commitment to social justice, and cross-cultural understanding. To that end, Sánchez is more than qualified.

A returning full-time student in Lehman’s Adult Degree Program, Sánchez, 24, also works full-time in a New York City public hospital, where she has come to recognize the need for equitable health care. One way to achieve it, she said, is to increase health care providers’ cultural competency and awareness of unconscious bias.

“I've seen my share of social inequality,” she said. “One of the current problems in the healthcare system is that minorities are less likely to receive the same care as other populations. I've been advocating for my patients for years to have [better] access to healthcare.”

Sánchez's experience working with underserved populations motivated her to pursue a nursing career and work toward becoming a leader in the field.

“My most important goal for the future as a nurse is not only to be culturally aware but also to bridge the divide [between providers and patients] and really personalize care,” she said. “I'd like to give my patients a voice and help them to be heard.”

Sánchez said she applied for the Frederick Douglass Fellowship because of the opportunities it would provide to expand her worldview and nurture her personal advancement.

Her advice for other Lehman students, she said, is to remember that “anything is possible, especially for a returning adult student.”

“For somebody who's been out of school for so long, I think it's a huge accomplishment to jump back into the flow of things, especially while balancing a job and your social life, home life, and work life,” Sánchez said.

The motivation to do that, she added, has to come from within. “You have to want it. You have to reach for the stars,” she said.