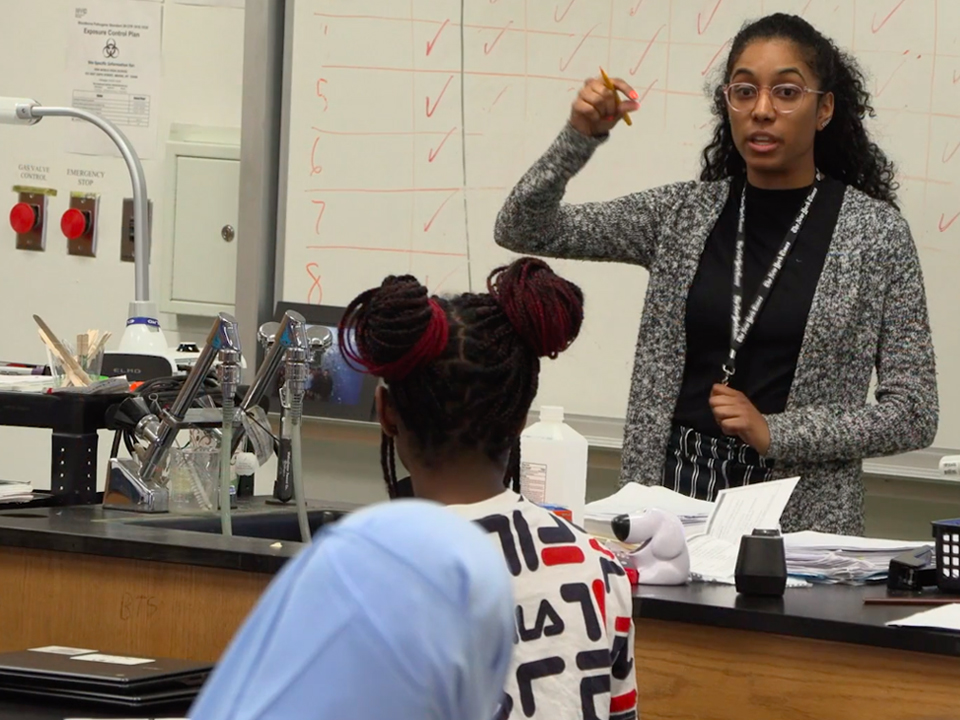 Lehman has a long history of pioneering STEM initiatives, including its STEM for English Language Learners (STEMELL) program at New World High School, which ended in 2019.
By LISA HIRSCHFIELD

Lehman College’s School of Education has won a $1.2 million award from the National Science Foundation’s (NSF) Robert Noyce Teacher Scholarship Program to recruit and train K-12 teachers with science, technology, engineering, and math (STEM) backgrounds, dispatch them to high-need schools, and support them in shaping students to become the next generation of scientists.

Noyce was established in 2002 to help boost the ranks of the country’s science and math teachers in underserved elementary, middle, and secondary schools. Named for the American physicist who coinvented the integrated semiconductor, the program is highly competitive. The grant is the third Noyce award that Lehman has received since 2008. 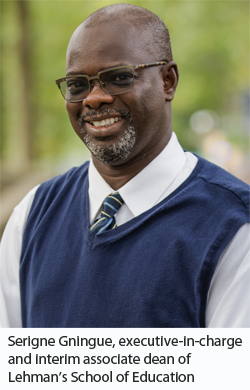 “This is about access and equity in the technology field at a time when U.S. competitiveness depends on how well we prepare all of our students—especially those in underserved communities,” said Serigne Gningue, executive-in-charge and interim associate dean of Lehman’s School of Education.

“Lehman has a proven track record of addressing the needs of marginalized communities, and we’ve had many successes working with the NSF in the past to impact the education of Bronx children,” he said.

Lehman will use the new funding to launch a three-year program, “Preparing 21st Century STEM Teachers for the Urban Classroom: A Cohort-Based Semi-Residency Model,” in partnership with New World High School in the Bronx and the Mount Vernon City School District (CSD) in Westchester. Both have strong relationships with Lehman and have participated in some of the College’s previous STEM initiatives.

The project is being led by a diverse group of faculty from Lehman’s School of Education and School of Natural and Social Sciences, with Gningue as principal investigator (PI). He’s joined by co-PIs Gillian Bayne, an associate professor of science education; Andrei Jitianu, professor and chair of the Department of Inorganic Chemistry; Anne Marie Marshall, an associate professor in the Childhood Graduate Program, Minor to Master Childhood, Grades 1 – 6;  Celia Cruz, a doctoral lecturer in the Department of Mathematics; Joseph Fera, professor and chair of the Department of Mathematics; and Jane Higgins, director of the New York City Writing Project at Lehman’s Institute for Literacy Studies.

Under the program, Lehman will recruit 27 STEM majors and STEM professionals who may not have previously considered careers as K-12 teachers to be Noyce Scholars at the College. They’ll ultimately earn a master’s degree in math and science education, with a goal to teach K-12 in marginalized communities. Funds from the grant will also support research on the retention and effectiveness of K-12 STEM teachers in high-need school districts.

All told, the project’s “innovative plans are meant to ensure the unfolding of essential foundations requisite for teacher preparation and student success at all levels,” Bayne said.

“These efforts are being executed with an eye toward strengthening competence and literacy skills in the content while preparing the next generation for its potential involvement in scientific discovery and technological innovation,” she said.

As another level of support, the program also provides for long-term guidance: Scholars will receive mentoring throughout their time in the program and two years of professional support from Lehman faculty once they graduate.

According to Wesley Pitts, a Lehman College professor of science education and chair of the Department of Middle and High School Education, that ongoing assistance is crucial to keeping new educators in high-need areas. “It’s important they have experienced mentors and professors to support them as they become highly effective teachers,’’ he said.

The first cohort of nine Noyce Scholars will be recruited later in the spring and matriculate in the summer of 2021.

New World High School and the Mount Vernon CSD will provide real-world experiences for the scholars as they complete their training. Educators from the schools, along with Lehman faculty, will also lead a one-week orientation for recruits.

“New World High School is thrilled to continue its collaboration with Lehman College and be a host school that provides high-quality clinical experiences for pre-service teachers, both online and onsite,” said Mithat Gashi, the school’s principal and a lecturer at Lehman College. In fact, he added, close to a quarter of the school’s faculty are graduates of Lehman College, including three previous Noyce Scholars.

For Kenneth Hamilton, superintendent of Mount Vernon CSD, the program is “a great opportunity to continue the district's resurgence in its quest for excellence in the education of students from marginalized communities,” particularly during the COVID-19 pandemic.

“This partnership is a shining example of how organizations must work in concert to benefit our students, the community, and ultimately our world," he said.