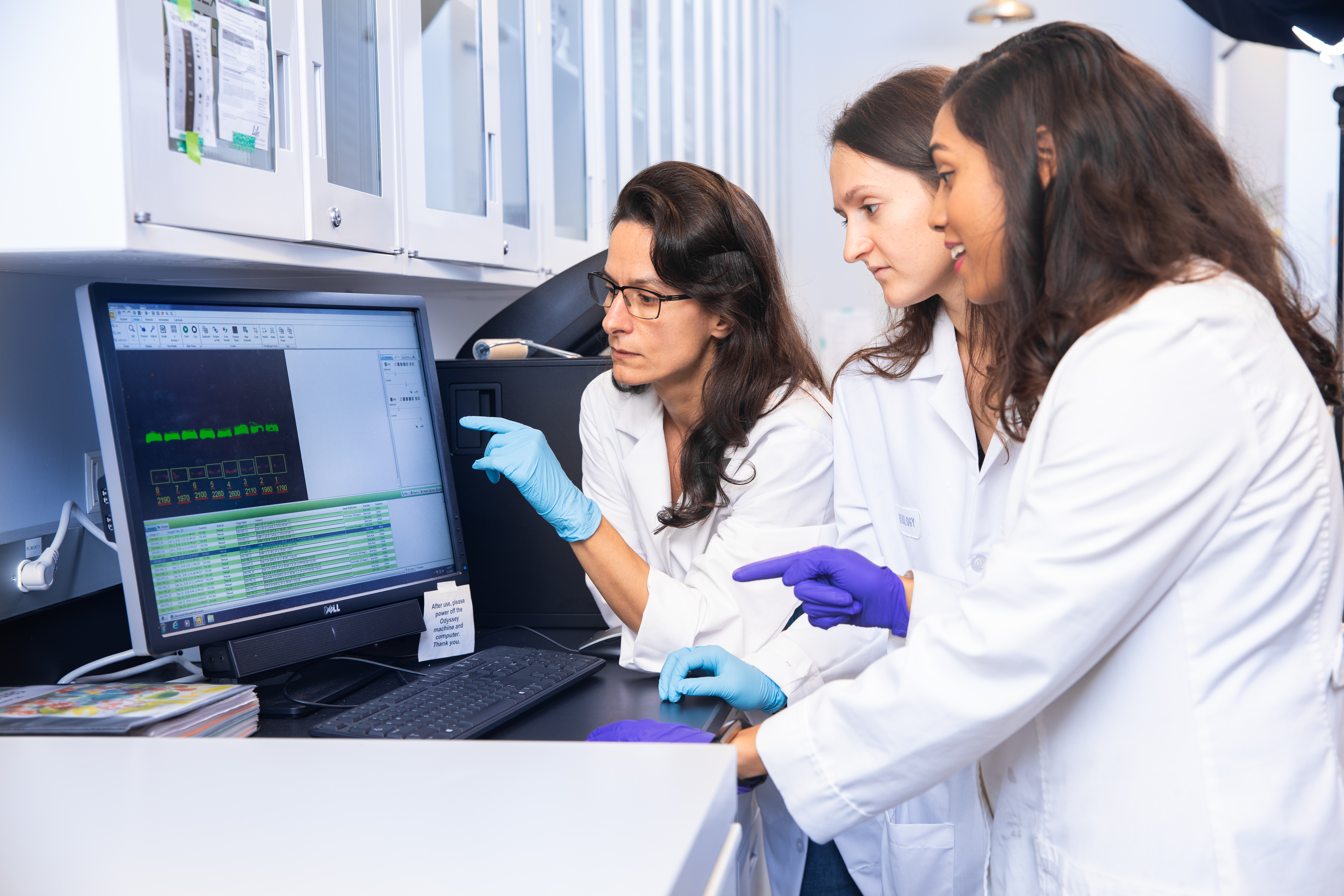 From left: Associate Professor of Biological Sciences Moira Sauane and former members of her lab, Justina Kasteri ’19 and Leah Persaud. Kasteri was accepted into medical school this year.
By LISA HIRSCHFIELD

Lehman has earned new recognition from the American Association of Medical Colleges, which named the school to its 2021-22 lists of institutions propelling significant numbers of historically underrepresented students toward medical school. Fewer than 10 percent of colleges and universities nationwide received that distinction this year.

The AAMC represents teaching hospitals, medical schools, and academic societies and administers the Medical College Admission Test. Each year, it publishes two lists to its website: one that tracks undergraduate institutions by the number of students who identify as Hispanic or Latinx and apply to U.S.-based medical schools, and another that does the same for students who identify as Black or African American.

Of 42 Lehman graduates who applied to medical schools for 2021-2022 admission, 16 identified as Hispanic or Latinx, and 17 identified as Black or African American, vaulting Lehman onto both lists.

“These listings affirm that as a minority-serving institution in the Bronx, Lehman plays an important role in diversifying medical care and addressing inequalities in health care in New York and beyond," said Scott Calvin, director of Lehman College’s pre-health program.

Lehman joins City College and Hunter College as the only CUNY schools to appear on both lists. Of the 185 public and private four-year institutions in New York State, only 13 were ranked on either.

The recognition validates a years-long effort led by Calvin, with support from Lehman College leadership, faculty and staff, alumni, and students to support aspiring medical doctors from underrepresented communities.

“To be on the list is a great accomplishment that largely reflects Dr. Calvin’s work in setting up a pre-health office that provides outstanding advice and support to individual students while also engaging all stakeholders to continually improve our pre-health pathways,” said Pamela Mills, dean of the School of Natural and Social Sciences. “We anticipate seeing student acceptances to all professional programs exceed national averages.”

In 2017, the number of Lehman students applying to medical school jumped by 25 percent from the previous year, and the number accepted increased by 44 percent. Last spring, 13 graduating students and recent alumni were accepted into medical school. Eight were members of SMART MDs, a pilot program launched at Lehman in 2018. It provides intensive advising, test preparation, professional development, and peer support to keep Lehman pre-med students on track, from coursework and internships through the MCAT and med school applications.

“We’re well on our way to making Lehman College a leading public institution for pre-med studies in New York City,” said Peter O. Nwosu, provost and senior vice president for academic affairs and student success and chair of the College’s Pre-Health Advisory Board. “The AAMC recognition is a testament to the success and commitment of Dr. Calvin, his colleagues, and Lehman students and graduates now pursuing medical careers thanks in part to the guidance they received at the College.”